Workplace bullying - power, hypocrisy and the presentation of self 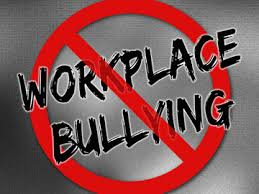 What happens when you see a person in serious trouble whom you have harassed for quite long. Kaleidoscope wishes to talk about those uncomfortable moments in workplace where you see the other person being harassed, bullied and ragged because of some  supposed perceived notion of right and wrong. What if you find the person in deep trouble and when you reach there you find the entire crowd that harassed or supported the harassment  already making their presence felt?

What appears to be a mere representation of hypocrisy is actually an interesting nature of human beings - we can call as the art of pretension.

What makes art of pretension so ubiquitous in our everyday life?

A. The power nexus and oligopoly

Yes, it is indeed true that kaleidoscope inhabits a world full of hierarchy and he has to abide by certain unjust informal rules. The world of bureaucracy is never a world of equality, bureaucracy divides and integrates by in so far as it functions as integrated whole. Such divisions are primarily based on unequal distribution of authority and often empowers persons of authority to undermine the  rules. Hence, in an inequal institutional environment people fine it logical to align long the power centers. Often such nexus remains unchallenged and most of the people finds a comfortable fit somewhere within that.

Within such a situation participating or passively supporting the continuous harassment  often is a strategy to maintain the status quo. For a basic human nature is to fear the change and a constant anxiety of "what if" the situation becomes worse than this? Or what if I become a target?  Hence, the status quo propagates such issues or violence, sometimes a good number of people become part of it unknowingly.

B. The strategic silence and situational voices

What about the person who gets bullied over and over again? First of all, there are two kinds of persons: a) who protests without articulation often resulting in even more instances of bullying, and b) those who remain silent and hence whenever they speak up no one pays any attention and the situation remains largely the same. These two are never strategic responses but are instinctive responses. Kaleidoscope like many others seems to find such situation every now and then.

It is often seen that the first categories of people having been harassed do not look for a solution of the problem. It is not that they do not suffer! They usually expresses their complains at the backyard but refuse to do the same on face. It results in a precarious situation for the person who attempt to articulate for them. The problem becomes manifold when the category "b" people keep on nagging for their harassment to those who attempts such articulations. It happens because of the same old inclination towards maintaining the status quo.
For category "a", harassment increases often with increasing number of people getting involved in the process and those who wishes to stop often find themselves playing the role of a moral police.

Kaleidoscope wishes to bring the good old Goffman here before he concludes this messy text. Yes, kaleidoscope finds a juxtaposed nature of role playing, role assuming, hypocrisy, ideal types and everyday practices. Now think about the example that he mentioned in the beginning of the text. The one which speaks of a situation where people who harassed a coworkers pretends to best friend to the colleague once s/he is in trouble! It can be seen a juxtaposed situation of morality, notions of right and wrong, interface with the power packed oligopoly (as discussed in point A).

Pic credit: http://www.forbesindia.com/article/special/country-cultures-make-their-mark-on-workplace-bullying/36275/1
Posted by Suman Nath at 10:04 AM No comments:


Yes, its first 5th October of my life when there is no longer you around. Just like the sky that changes over time, or the river making a new course, or like the dew drop creating soothing sound of falling on a pool in a late winter night my conscious life with you rapidly seems like a moment, which is gone. Gone forever.

The more days pass my memory plays a trick. It begins by showing the face when you were leaving us with immense pain, probably a burning sensation of heart slowly giving up and a liminal phase of rapidly falling bloodsugar. I remember myself saying my last goodbyes as I saw mother crying out. I consoled "how long do you want him to suffer? let him go." Your face, that face of a person you love, facing death, I remember, it was not smooth. It is never smooth for anyone. The spectacle changes you, once and for all. There was no tears for me, till today! I was holding your hand, feeling the body giving away with the heat that used to comfort me back in my childhood. Adulthood is only for detachment. Yes, I do not remember hugging you ever before you really fell sick with  a growing tumor! I remember how different it was, I remember I was easily hugging you in your last days and that wiped off my childhood memories. Slowly telling  me Suman, you are going to loose him. I whispered back "sooner the better!"

You cried looking at you sitar. You shouted, "My sitars are crying for me, let me play some music!" Yes, you tried, tried hard. I remember you allowed me for the first time to record a few of them which you had avoided throughout your life! Perhaps it was a father's wish not to abandon the home, erase the music completely.

You know, it has disappeared! I no longer come back after an exhaustive day and enter into the home listening you playing your favourite ragas in sitar.

Life is never the same, nor the world! I wish I do not forget your smell, your touch, your fingers and above all the musical childhood which you gifted me! 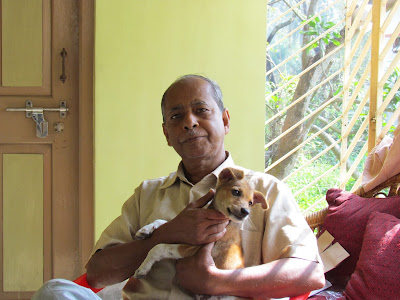 Posted by Suman Nath at 8:14 PM No comments: