Just another drink or two perhaps three in just another day in a kind of familiar space is what makes you grow with time. Its more than the drink or the food and the increasingly loud western remix of 1980s songs the company
Kaleidoscope keeps that matters. The conceived space contrasts itself from the yet to occupy status of the unfinished war affected like high rises, within the unoccupied and finished mall. The space in itself is in a dilemma to brew its own beers and then name them as scotland, germany or the like. It gives ample room for the frozen paradox. Its more paradoxical when it calls itself "country roads" which actually stands on the murdered country roads! The paradox of a new city - the urban lifeline of Kaleidoscope's country. What can be more interesting? Asks kaleidoscope more often than he actually visits the micro brewery.

The answer has been delivered yesterday. More interesting is when you see a group of five young men having rounds of whisky, beer, vodka  for hours and then standing up for national anthem played in the television before India Sri Lanka match begins.

Yes, the nation needs such programmed responses even after rounds of drinks in a pub build on murdered country roads, brewing beers named as scotland and playing remix of 1980s popular western tracks.

While Kaleidoscope was on his way back in American Uber someone whispers that its not Simulcra out there to study, you are tricked to be trapped inside and you too simulate everyday in a liquid reality.

While impossibilities can sleep together under the velvety bejwelled blanket - the night sky, there are untold stories to be co-authored. Stories of the beginning and continuation of the impossibilities. Quite the like the departed souls who climb mountains just to clear up the distance and spaces in a world that otherwise tries best to push souls to drift away, there are stories with with invisible trails.

Trails that melt the ice to make the travel possible. Trails that make you feel secure, to know for sure the connections exist between drifting planets. Possibilities for two and many different stories that are told and retold to the distance places but never co-authored, because so long as there are scores of trails and long vein connections, there are constructed spaces.

No matter how many galaxies away, for you and your co-author is there is one balcony with two coffee cups steaming to a distant future. Kaleidoscope can smell the caffeine and cigarette and the smell of the river nearby! Souls never let go! Never ever... never forever. 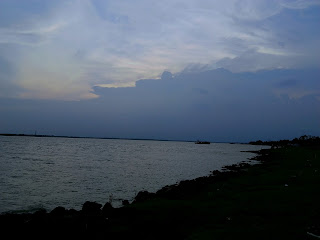 Posted by Suman Nath at 2:25 AM No comments: 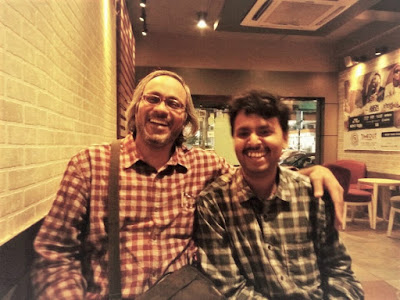 There was a pre-Kaleidoscopic time, and it is mentioned in past, but that does not mean that it is over! It is not over because the meaning of the pre-Kaleidoscopic time is never settled just as none of the meanings are well settled ever. This story is rooted in moments before the Kaleidoscopic beginning in a workshop in 2010. He was looking for an avenue to vent out himself, and he planned this blog. However, the workshop gave Kaleidoscope unique experiences. It was then disappeared in an unfinished trail and lost (not completely) in the layers of time. What today Kaleidoscope experienced Derrida would have said "Différance it is." Derrida in his relatively little easier books Speech and Phenomena (1973) and Writing and Difference (1978) talks of an impossibility to settle with the meaning of the signifiers because there are too many signified attached and each of them is directing to some newer bunch of them. Its like a never-ending circle of meaning making which is Différance indefinitely.


Perhaps the 'something missing' in nature of the discourse enables kaleidoscope to connect, to bring out the long lost flow of narratives after a while - the time which seemed lost, but was snoozing in a long pause. While Kaleidoscope in his textual experiences with Derrida was afraid of the loss of signified and being lost in the game of signifiers can now see another dimension to it. It is because of the lack of settled nature of the communications itself he could trace the trail of the qualitative workshop that happened and moved his understanding about the issue seven years ago. Its not that he lost the entire connection to the intellectual vibration created in the workshop through his work and rework on the article which finally got published with Routledge along with other participants of the workshop! Meanwhile he, just like others started making other meanings through life experiences. However, he found the trail back in track immediately the moment of another series of short but intensive game of signifiers - the discourse in a little coffee-shop. Kaleidoscope could immediately connect to the cloud of intellectual vibration that he had to leave for a while in a long snooze!


The meaning making in Différance is troublesome as it continues to question what Kaleidoscope's species ultimately communicates - ultimately, its communication that enables them to coordinate actions and rule the world. However, todays immediate connect and revival of the vibration after the long snooze assures Kaleidoscope that it is this Différance that makes the connection possible. The meanings were never objective, unchanged and moreover, hence was never settled at all. Kaleidoscope knows even today it was "the indefinite referral of signifier to signifier... which gives the signified meaning no respite... so tat it always signifies again!"


Therefore, thoughts can be exchanged, untold stories can be collected, an article - a book might be born with Différance, over a cups of Darjeeling tea - perhaps fleeting like a Himalayan forest ground. There will be more stories to be told.


Hence, Kaleidoscope like many others continues to survive all the disruptions as he knows none of the meanings are well settled and that is a wonderful thing. The trail continues between researchers, between books and articles, between blogposts and between words and discourses.


Yes kaleidoscope now understands there are "certain relationships, unperceived by the writer, between what s/he commands and s/he does not command of the patterns of language that he uses. This relationship is... a signifying structure that critical reading should produce... production attempts to make the not seen accessible to sight." (Derrida, J. 1976. Of Grammatology. 158, 163)
Posted by Suman Nath at 11:03 AM 1 comment:

How do you know that you are in a hierarchical society?


Kaldeidoscope happens to live in a society which is hierarchical. He has studied it in the name of caste, class, prestige and many others. He often visits spaces which are supposed to challenge the assumptions behind the hierarchies. However, does they? The significant question henceforth is whether one can at all withstand the programme installed in the name of socialisation in the phase of child development. Malinowski decades ago mentioned something about the difference between what people say they do and what people actually do! To comprehend and make sense of the difference he mentioned something like participant observation. Participation to such an extent that you can actually write a whole ethnography based on Memory – remember Srinivas in his The Remembered Village – after his field notes were accidentally burnt.


To know the habitus of the people you really don’t always have to have a long years of participant observation. It is possible, even more so, when you slither yourself through a microscopically different habitus carrying a sufficient experience of the underlying structure of the social whole. Hence, while you have read Homo Hierarchicus by Dumont, you also tend to find hierarchies beyond the arrangement of people, but also in the arrangement of objects. For example, caste is casted in our dreams, in ghosts (petni is lower than Brahmadatti), in flower (jaba happens to be a low graded flower), so on and so forth.


However, all of a sudden Kaleidoscope is slithering through organisations which are supposed to question and deconstruct the existing order of things, is ingrained within.


Hence, when the power centre arrives all others stand on their feet. Whenever, some power embodied persons are being felicitated the rest are on their feet. Kaleidoscope, incidentally referred a junior’s name before naming the senior one’s in their joint work he was immediately reminded about who works with whom in the ‘proper’ hierarchical order.

Posted by Suman Nath at 1:58 AM No comments: