Sacred mountain, corporates and mao: the case from Niyamgiri hills 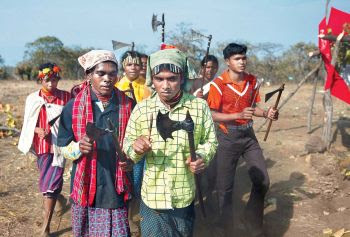 Parallel to kaleidoscope's skepticism regarding corporate promotion as we see in the annual budget, Orissa is siting example of the darker side of neoliberal dreams and an "effective" strategy of corporate promotion.
The background:
This is the case of a state where two-thirds of rural families live below poverty line with other dismal social indicators. While straightway industrialisation is seen as a ray of hope for the people of Orissa, however, the reverse is the true, at least, in local people's versions. Recent cases with Posco, Tata Steel and Vedanta Aluminium Limited show strong opposition from people, as they are threatened to snatch off their fertile lands. Lands which fall within scheduled areas!
Government and people:
Chief Minister Naveen Patnaik's voice is for peaceful industrialisation process. However, the protests from people stays unheard and state armed forces are in operation which results in killing of 14 tribal people at Kalinganagar near proposed Tata steel plant on January 2, 2006. More than 700 armed policeman are deployed to facilitate industrialisation. The construction of road for Tata steel is harshly protested as a result hundreds of policemen fired rubber bullet injuring people and on May 12 a policeman open fire to kill a tribesman.
The government is alleged of taking unfair benefits from the corporations.
Sacred mountain and their inhabitants:
Vedanta finds Bauxite in and arround Niyamgiri mountains inhabited by Dongria Kondhs, a denotified Premitive Tribal Group (PTG) who believe Niyamgiri mountain to be their king and God. Once the company gets clearance to mine the hills, they will be thoroughly displaced. This will not only ruin the entire mountain, but also thousands of inhabitants will be homeless, thereby seriously affecting their culture, peaceful living and basic amenities.
Rules and the ministry:
Traditional Forest Dwellers Act, scheduled tribal area act (5th and 6th schedule), protects tribal rights on forest and land. Union minister Jairam Ramesh declared that ministry is not in a hurry to give clearance which shows a ray of hope for the people after sacrificing a lot.
Escape from the rules: Mao smell
Dongria Kondh movements backed by Communist Party of India (CPI) maintains absolute secrecy. They do it because of the fear of being tagged as having Communist Party of India Maoist connection. The chief leaders of the movement are ready to confront the being tagged as maoist and killed by Central Reserved Police Forces (CRPF).
The scenario:
If Mao connection is established and CRPFs are deployed to help corporations getting clearance - it is highly likely that this would be standard strategy with three steps:
1. identify an area suitable for corporates and initiate acquisition.
2. use state machinery to help the corporation.
3. when all else fails declare it as Maoist inhabited area and deploy CRPF troops to initiate "Clear, Hold and Build" strategy!!!!!
The VAL chief operations officer Mukesh Kumar argues that mining area does not have a settlement therefore, it does not involve displacement. It indicates serious lack of understanding of tribal life, as they depend of natural resources for three Fs - Food, fodder and fuel along with other requirements like medicine and also emotional attachments.
See yourself:
http://www.mynews.in/Blog/Vedanta_rebuts_Amnesty_report_on_mining_project_impact_B558.html
http://www.flonnet.com/stories/20100618271203700.htm
http://www.businessweek.com/news/2010-05-17/police-firing-at-posco-s-india-site-triggers-protests-rallies.html
http://www.mynews.in/News/The_ugly_side_of_land_acquisition_in_India_N59322.html
http://www.survivalinternational.org/films/mine
Posted by Suman Nath at 9:12 PM 2 comments: