Kaleidoscope by virtue of his continuous and never-ending service to Higher Education often undertakes extensive travels to investigate the progress of pupil in other side of the river - in Nandigram. The ultimate aim is to impose a momentary halt in his non-judgemental self and start judging pupil and their works with a few often stereotypical questions. However, as always happens Kaleidoscope finds these moments as opportunities to experience people and places.

Therefore, Kaleidoscope must leave his office early and cross the river which has the most amazing sun-set views. 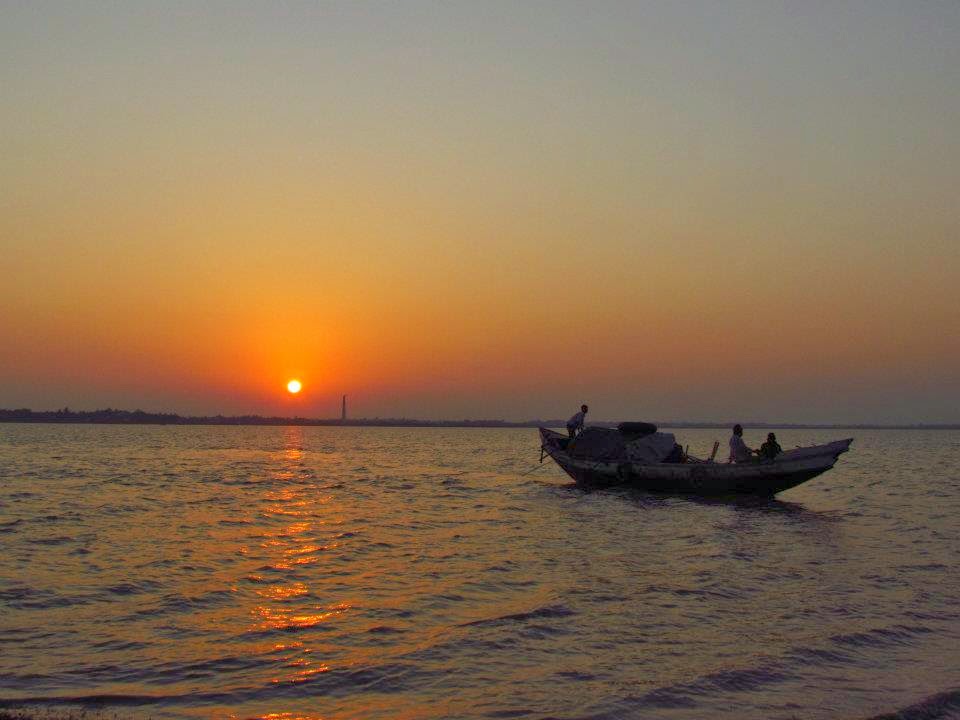 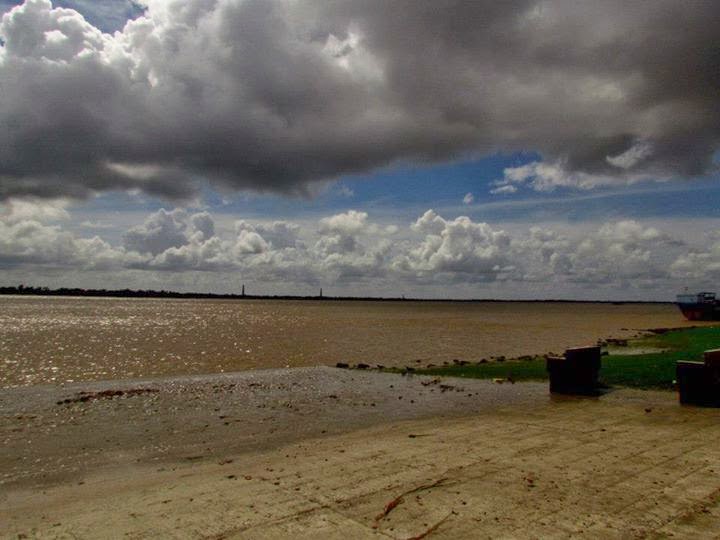 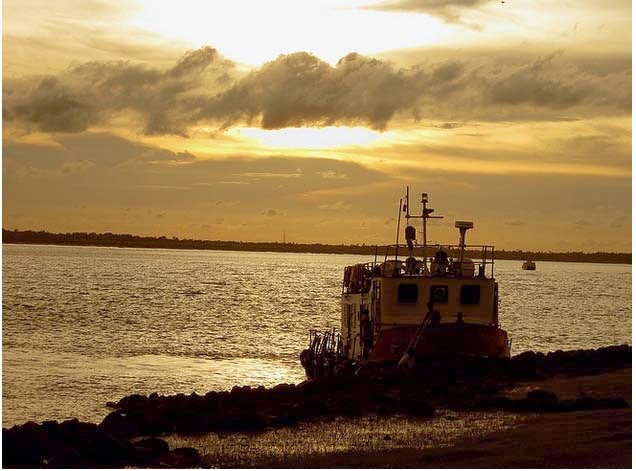 Kaleidoscope crosses the river in an over crowded machine run boat which constantly speaks monotonous word "bhat bhat bhat bhat" and therefore, these are "bhotbhotis". People can manage to sit on a three inch elevated side wall of the boat and speak with each others. Much like local train co-passengers they start talking from nowhere and continues until the boat reaches its destination. There are issues of health, office politics, state and central politics, cricket, good looking girls and films. As Kaleidoscope almost makes once-in-a-year visit to Nandigram he is often asked by the daily passengers his whereabouts. He is mostly thought of as a newly appointed school teacher or somebody going for the BDO office work.

It takes about 10 - 15 minutes to cross the river and often there are displays of bravery by age old or quite young people who jump from Kaleidoscope's boat to another boat which goes to Nayachar. If Kaleidoscope's boat starts late it meets the Nayachar boat mid river and both the boatmen try hart to bring their bhotbhotis closer in such a way the gap becomes just enough for one brave heart person to jump off, but there must be a distance so that these two do not collide with each other.

When the boat anchored in the opposite side of the river bank, a race takes place to catch the trekker - sole communication medium in most of the rural West Bengal. A trekker is a metal hooded vehicle with an unlimited carrying capacity. While there are sitting arrangements for about 10 to 12 at least 35 to 38 people boards and travels with a smile. The drivers and helpers are their friends or neighbours and many of them are grown up together. The attachment is such deep seated that several trekkers bear the inscription "bandhutto barite/ byabsa gaarite" - loosely meaning I am a friend of yours' at home but this vehicle means business - an alternative way to say "pay to avail the service." There is a huge concession for school going children, they boards - almost always clings with the vehicle and pays Rs. 2/- against the minimum fare of Rs. 5/-. Everytime Kaleidoscope goes he finds the driver taking personal care of each of his passengers who are dangerously clinging with the vehicle. He constantly reminds passengers to holdfast. At the back side of the trekker where Kaleidoscope most of the times gets to seat has a single sit in between two parallel sits virtually omitting the slightest leg-space. This time a girl sits on that single sit and keep browsing facebook from her touch screen cellular phone. Yes, while these people do not have a 'proper' transport facility, they have mobile phones and many of them do access facebook.

The trekker with unlimited carrying capacity makes regular stoppages and its carrying capacity increases as the drivers never say no and passengers reciprocate. once in a while it has to stop to check whether the hen or duck which was crossing the road actually have crossed it or is still waiting under the vehicle. The car stops, the helper who happens to be a spider-man to be able to cling throughout the vehicle and collect the fare, asks "what happened?" The driver asks "you must first check with the duck!!" A cheering smile goes across the vehicle and it continues to shuttle. The people of Nandigram having being able to mark a prominence in the social movements related to land acquisition continues to toil happily between "Kendamari to Nandigram bazar" or between "Terepekhya to Nandigram bus stand." As Kaleidoscope is writing this unproductive experience he can still hear the cheering smile by the school going students who were advised by the trekker driver to ask their MP for bicycles... or the moment when the real life spider-man had to check whether the duck was still there!

P.S. Kaleidoscope's boss at one of the best institutes of the world once received a FPM (PhD) application with a Post Script "Sir, I am from Nandigram!"
Posted by Suman Nath at 4:25 AM 2 comments:

“Water water everywhere...” What the fuss does that mean?

The pictorial Mukutmanipur dam which halts water flow of the river Kumari and Kansabati and irrigates parts of Bankura, Paschim Medinipur, Purba Medinipur and Hooghly provides one of examples of the bitter and unreported experiences of what happens in neighbouring villages of large scale dam constructions. People a couple of generations ago have seen villages submerged under water, large scale evacuation process and irrevocable loss of social and emotional bonding.
What did they get in return is perhaps the most vital question. To understand this question I have been roaming around villages of Dhagora, Peerless para, Ekkaduar, Nadupara, Jambedia and Barghutu. Each of the villages fall under Gorabari Gram Panchayat which is now controlled by the Trinamool Congress. Mostly Tribal people like Santals, Bhumijs and a few families of Mundas occupy these villages. Some Scheduled Caste groups like Teli, Lohar and Bene live in some of the villages in the region.  While the dam is filled with water regulated by the irrigation department to irrigate different parts of the neighbouring districts people in the adjascent villages keep depending on the rainwater to cultivate.  Excepting the village Jambedia the rest of the villages cultivate a single crop and the amount they got is just enough for preparing next year’s seeds and providing their family a couple of rice meals throughout the year.

What makes the difference?
The difference which will be discussed soon is solely an outcome of positional advantage of the Jambedia than the rest of the villages. Jambedia which is about five kilometres south-west from the head regulator of the Kangsabati river barrage, have the closest farmlands from the dam water.  Villagers use suction pump to pull out water to irrigate their farm lands. Interestingly the strategic locational advantage of the village farmland is a result of the evacuation process. The village headman, the Majhi, who is old enough to see and remember the actual process of evacuation reports that people from Jambedia village have lost their land and bought new lands from neighbouring villages like Surigram and Jhanti-Pahari which are now disappeared under water. The irrigation results in production of multiple crops which is otherwise impossible in the region. The Self Help Group (SHG) initiatives taken by the Panchayat have resulted in the availability of loans and the village SHG members have purchased several such pumps to irrigate their farm land in arid seasons. However, similar SHGs of the adjacent villages did not buy simply because they barely have access to the water that they see every day from their village.

The nature of difference:
One crop makes a family to survive two crops ensure educational attainments and three crops makes significant impact on health and well being. I did Participatory Rural Appraisal as well as Focus Group Discussions to find out the nature of educational and occupational attainments of the villagers. It is seen that Jambedia has several college going students and has sons and daughters working as school teachers, government employees and as other white-collar workers. This has been possible because on average they could afford to send their children not only to the schools but also to the colleges and even to universities. Other villages have school going children, perhaps a good result of the Mid-day meal programme but none of the villagers could afford to continue their child’s post-school education. Young boys are sent to cities like Kolkata, Hyderabad, Bangalore and Pune to do construction works. While they stay abroad for a long period of time, it is reported by several villagers that they have high rate of Sexually Transmitted Disease, perhaps a common trend among the migrant labourers.


While water scarcity is the main factor behind the difference between Jambedia and the rest, the Gorabari Gram Panchayat is constantly trying to improve water retention by constructing hapa, small water reservoir with the help of Mahatma Gandhi National Rural Employment Generation Scheme. My two years field visit in the region shows that while the Gram Panchayat has planned innovatively to create hapas and interconnecting them to ensure long-term water retention, it is extremely difficult to convince villagers to provide land where such interconnected hapas can be constructed. There is no initiative from the irrigation department to install possible schemes like River Lift Irrigation, may be because it would reduce actual irrigation potential. However, in consequence villagers apart from Jambedia continue to toil for water which is plenty but inaccessible.
Posted by Suman Nath at 5:19 AM 2 comments: