The last canal - newtown and the great transformation

A sudden appearance of a canal in the middle of a newly built planned city speaks so much of its past. This is one crisscrossing kaleidoscope's place to earn livelihood, goes beside the college building, passing through one of the petrol pumps, though the major arterial road possibly ends with one of the old canals that carries swege to the kidneys of the kolkata  - the east kolkata wetlands.

This canal, not so conspicuous has created an unusual assemblage of greenery, unkempt, forest like, natural outgrowth, perhaps more beautiful than the difficult to pronounce, alien boulevards and moduler gardens.

Kaleidoscope can see wetland birds including different types of kingfishers, herons and storks paying regular visits. Relatively large trees with insects and a few fruits also attract birds, like black headed oriole, oriental magpie, indian roller. All, are natives and displaced with the rapid transformation of the erstwhile farm land to SEZ and ghost town.

Kaleidoscope sees a 'development' initiative under progress with concretisation of one of the banks of the canal. It would not be very far from today that the canal will transform itself, irrevocably.


Meanwhile kaleidoscope gets invitation from the canal every day on his way back. Those provocative water receeded mud banks, a variety of plants floating on the water and the reflection of an old sun whisper the memories of the place. Perhaps, civilisation and the built in city do not want it to be heard by others. It can bring disasters to the planned future.

However, such calls are intoxicating, or at least that is what Kaleidoscope feels. 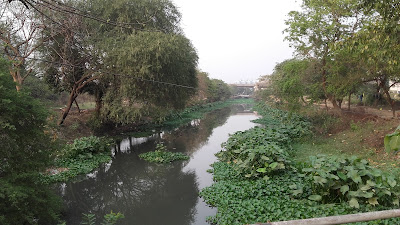 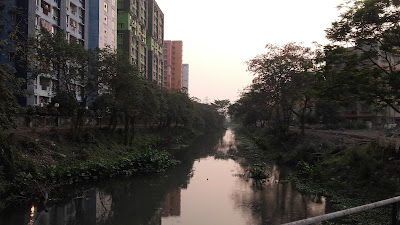 Posted by Suman Nath at 4:28 AM No comments:

Kaleidoscope would like to relate the frenzy crowd of age old tradition to the invented traditions.

Age old frenzy crowd at the heart of the Hindu extravaganza

A few years back Kaleidoscope went to varanasi to explore and make sense of the city. The day he reached varanasi, it was Mahashivratri. He remembers walking more than a couple of kilometres to reach the hotel. The hotel was located very close to the famous Dasaswamedh ghat. Because of the Mahashivratri, the approaching road to hotel which passes through major arterial road connecting Kasi Viswanath temple was closed.  He has never seen such a frenzy night in his entire life. People dressed in many avatars of Lord Shiva, his wife Parvati and their followers came and go. The entire crowd called themselves as 'Barati' simply meaning bride's or groom's party. He didn't sleep for the entire night and watched the spectacle. He could see people from different parts of the city and also from the different corners of the world participating in the procession. No one asked their identity, religion, caste or creed. The procession was coming fron different Muhallas, police administration kept a strong surveillance and people - many highly intoxicated  enjoyed the space, the spectacle and the emotions.

Invented rath and BJP in Tripura


In February 13, 2018 a procession on the occasion of Mahashivaratri began from Ayodhya. It is scheduled to reach at Rameswaram on March 25 on the occasion of Ram Navami. It is supposedly carrying 'purely spiritual' matter with no political implications.

There are little details that Kaleidoscope wishes to focus on.

1. 41 day long yatra covering 6000km
2. It is expected to cover 224 loke sabha constituencies
3. Primary objective is to aware people about the importance of constructing a grand temple in Ayodhya
4. Make people understand the importance of initiation of Ram Rajya of best possible governance.
5. The symbolic rath is designed according to the proposed design of the ram mandir

It has already covered many constituencies. Last time there was a massive Rath Yatra we have witnessed the darkest hour of the post independent India -Demolition of Babri. Kaleidoscope doesn't know what holds for Rameswaram this year.
Meanwhile there is a win in Tripura, followed by destruction of a Lenin statue and vandalizing several CPIM and Left party offices across the state. 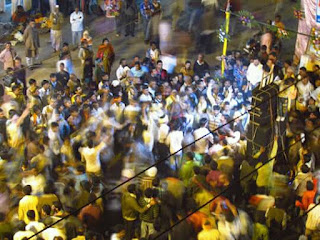 There is indeed a deep rooted difference in the psyche of the crowd which comes out of the age old tradition and the sudden eruption of inventing traditions. While kaleidoscope can remember the smell of marijuana, alcohol and totally intoxicated 'barati' completely immersed in the imagined marriage ceremony of Lord Shiva there was  no hatread, no question of identity issues of the participants asked. Varanasi never asked those essential details. Meanwhile, ram navami rallies carried slogans of a monolithic Hinduism and the symbolic Rath Yatra which had 'no political intention' links ram rajya, 'will construct temple there/  mandir wohi banayenge' and elections together. The crowd becomes ready to do anything. As kaleidoscope like one billion and more Indians remember Babri incident.