Memories with father 2 Sound of Silence

Baba often used to play Sitar according to the ambiance, time and weather. No compulsion, no hurry to become famous or to 'master' something fast! In rainy days often Malhar or Megh used to be his choice.
After hours of his practice sessions, he used to be silent for hours to follow. Sitting alone. We used to live in a kachha house. Baba loved that kachha house of ours. "See nature can go through us, those rich people cannot afford that!" he used to explain.
I often enjoyed the silence after he finished his practice. I could feel part of the performance which used to remain and roamed around us. Like the smell of a refreshing flower - sound of music used to engulf us for some moments.
Baba taught me the sound of silence - literally.
Posted by Suman Nath at 10:03 AM No comments:

While many of us are fond of Eagle's Hotel California, Gipsy Kings hold special memory for me. Baba introduced me with Gipsy Kings and their version of Hotel California. I nevertheless became fond of Eagle's version lateron, like many others. He once took up the tune of Gipsy Kings' guitar in his Sitar. He played the entire tune in the thickest of the strings to create that rough and 'rocky' sound. While it ended he smiled and said "don't think we cannot play what they can play and make you people dance all night long." He never played that again in his entire life.
There are sounds roaming around us, whispering somewhere around the corner of an empty room, somewhere down the memory lanes.

Posted by Suman Nath at 4:04 AM No comments:

Everyday experience of smells and capitalisms.

When smell gives you an idea of the space that surrounds you, its cultural perception. Kaleidoscope on his way to the built in city usually experiences  a transition from his peri-urban neighbourhood through part of the old city ultimately to the late capital built in city. He travels along with people from the hinterland. People who work as construction labours or as informal economy entrepreneurs. Kaleidoscope smells the unadulterated human bodies - straight and unfiltered.

However, as he gets down to board the AC volvo bus the crowd disappears. He leaves his  human 'smelly' world of the masses and enters into the builtin airconditioned bus often carrying the smell of a 'refreshing' roomfreshner. Then comes a series of people wearing different 'sexy' smells. Kaleidoscope's cultured nose can now differentiate between the a feminine and masculine smells. The smell instigates grains of charms! Kaleidoscope unknowingly recognises the urban elite smell which occupies the less crowded bus destined to the information technology hub. He readily forgets the human 'smelly' overcrowded buses which often overtakes his bus and vice-versa. Suddenly the world becomes contained with a feeling of cool breeze containing built in and constructed smell of success!

Kaleidoscope knows smell changes and he is taught that it changes for 'better' - no need to have communism in so far as you can avail the 'charming' smells surrounding you! If you disagree ask kaleidoscope, how happy he becomes when he rides the volvo leaving the overcrowded buses coming from hinterland! 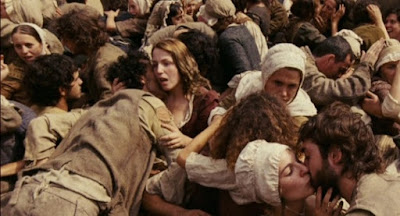 A still from the movie "Perfume"
Posted by Suman Nath at 3:48 AM 2 comments:

Eventually, they leave and settle down in crowded outskirts of the township. The state takes initiatives to build construct as many things as possible to restrict entries. New Town, Kolkata, surrounded by numerous villages is no exception. There are existing villages and shanty like neighbourhoods for uprooted people. Many of the settled people had to abandon land at a price which is more than 100 times to 1500 times less than what they were paid about 20 years ago.

Hence, people here, the 'indigenous' ones can barely overcome the trauma and the loss. Meanwhile, Kaleidoscope belongs to a college which is established at the heart of the new town with  a postmodern glassy building not much different from the shopping malls which are concentrated in the region. Students here comes from those villages and shanties. On the one hand they experience their uprooted everydaylife and on the other hand they witness all the gated communities, mall going youngsters. There seems to be an identity crisis as they are squizzed between the extravagance of IT industry based  satellite town and its outskirts. There are juxtaposed realities and the fleeting positions which continue to seek for an anchor which is long lost.

Meanwhile, when Kaleidoscope attempts to explore some of the villages he could readily identify the boundaries. In a village near Shapoorjee complex there are farmers still unwilling to give up their land and cultivating while a fast food chain Katleen has entered. Meanwhile, cash is coming through the occupation of house keeping by the men and maids by the women. There are opportunists forming syndicate of labour and material supply to the massive constructions working with an alliance to the local politics. Hence, there are all sorts of juxtapositions. While there are still basket makers, farmers and fishermen; starving bodies in the shanties, people living in extreme poverty,  people trying to marry off their daughters in tender age and seeking superstitious practices for remedies; there are others enjoying the seepage from the capital intensive exchanges in the areas where the city is growing fast.

Kaleidoscope along with few of his willing friends went crossing the sweage that carries most the waste water of the town to explore the villages of the uprooted. However, there are only bamboo bridges which allows the villagers to walk through only or at most carry a motorcycle slowly without riding. This perhaps represents how the canal is 'protecting' the .'outisiders'  to intrude the planned everydaylife of town. On their way back, Kaleidoscope and his friends discovered the tea stall near the college being evicted! Perhaps the 'outsiders' were intruding as a mechanism to earn a livelihood!

A couple of photos and supporting story may be found in the following links.

Posted by Suman Nath at 1:00 AM No comments: