How did kaleidoscope miss the over crowded train journeys since 2007. Train compartments are the places where you are doing ethnography on the way. One of the major methods he used in his ethnography during the violent days of political turmoil in West Bengal happens to be doing nothing. Keeping the mind recorder open and sit peacefully at a nearby tea-stalls in a crowded place. Occasionally smiling at the people enquiring about their cultivation experience, children's studies and future plans. Meanwhile keeping the mind open so as to not miss any significant event being discussed. Later on he explored significant cases thoroughly.

This particular habit was not part of his theoretical knowledge of the 'methodology' classes but what he experienced in his decade long commute in the infamous Bongaon locals boarding from Birati and getting off at Sealdah. He used to cling by holding a slender grill of the window and the handle meant for pulling the door on the other. After Durganagar- the next station he used to get a strong push from the outside to enter inside. It was suffocating but close to the people. Close so as to blurr the class, caste, ethnic and regional boundaries. Perhaps national boundaries as well as he knows there are many people from Bangladesh looking for a better life in the second most important city of colonial period the Calcutta.

Kaleidoscope used to travel in the same compartment and used to listen to the stories and narratives as they progressed over weeks, months and perhaps years.

Stories range from economy and politics to sexuality. From getting drunk to refusing tea. From going to Sonagachi to disregarding sexuality completely.

Local trains are no shortage of stories. There is no better way to do ethnography than to listen to people as the talk! 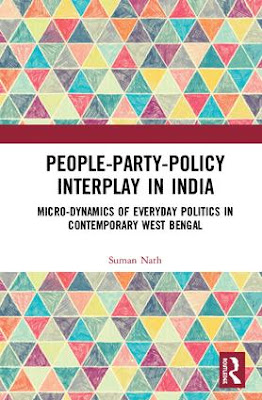 Posted by Suman Nath at 9:28 PM No comments: